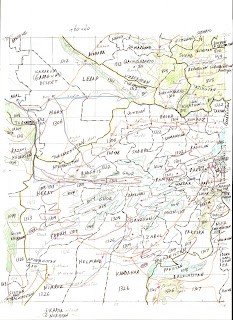 Overview
The Central Afghanistan Mountains are a temperate desert and dryland region with high elevation alpine meadows and forests. The northeastern portion of the map in Uzbekistan and Tajikistan is grassland and savannah; southeastern portions grade into tropical steppe in Balochistan. Mountains rise from the deserts throughout the region, including the Pamirs in the northeast, Hindu Kush in the central area, Kopet Dag in the west, and Sulaimen in the southeast. Many of the rivers that rise in the Central Afghan Mountains, also known as the Hindu Kush, flow into deserts and dry up. This includes the Amu River, the largest river in the area; the Hairi or Tejen, which arises in Afghanistan and disappears into the Karakum (Garagum) Desert in Turkmenistan; the Morghab River, which arises in Afghanistan and flows past Mary in Turkmenistan before drying up; the Farah River and Helmand River, both of which empty into swamps on the Iran-Afghanistan border. One exception is the Kabul River, which flows east from the city of Kabul into the Indus River in Pakistan. END_OF_DOCUMENT_TOKEN_TO_BE_REPLACED