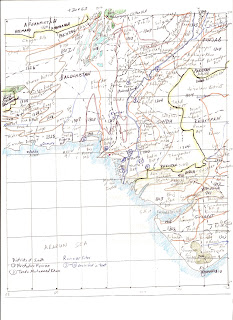 Overview
One of the cradles of civilization, the area surrounding the lower Indus River includes both temperate and tropical arid areas. The Indus civilization dwarfed Egypt and Mesopotamia in land area, population, and engineering. There were at least six large cities, with trading posts stretching from northern Afghanistan to Oman (Lawler, 2008a). The urban areas collapsed in 1800 BCE (Lawler, 2008b). The boundary between the Indo-Malayan and Palearctic Biomes is just west of the Indus River and shown as a red line on the map. The Kirthar and Brahui mountain ranges define part of this boundary. To the west of the Indus, the largest ecological region includes xeric woodlands covering a series of mountain ranges. However, to the northwest of the Balochistan Mountains, the woodlands grade into deserts extending south from Afghanistan and east from Iran. These deserts contain small areas of irrigated fruit trees and orchards of date palms. There is also a coastal desert and plain region along the Arabian Sea. Along the Indus River and in the Kathiawar Peninsula of India is the tropical thorn scrub region that dominates much of the Indian subcontinent. Tropical fruit and grain crops are grown in Punjab and Sindh using irrigation. Further east along the Pakistan-India border is the Thar Desert and the Rann of Kutch seasonal salt marsh. A small area of dry deciduous forests is found in the Kathiawar peninsula area. Diu is an island at the south part of the Kathiawar Peninsula which is governed as part of the separate state of Daman and Diu. END_OF_DOCUMENT_TOKEN_TO_BE_REPLACED