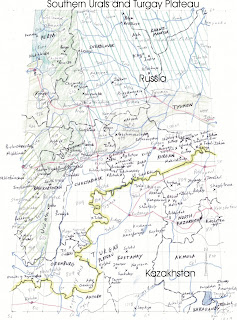 This map area marks the transition from the Central Asian Desert to the vast boreal forest that covers northern Europe and Asia. In between are the steppes, which in this area contain patches of forests. The European and Asian steppes are separated by the forested Ural Mountains. East of the Urals in Chelyabinsk and Sverdlovsk are areas affected by the legacy of nuclear weapons production. The boreal forest is separated from the steppe by a band of deciduous forest. East of the Urals, thousands of lakes and wetlands dot the steppe, deciduous, and boreal forest, providing vital habitat for waterfowl in a dry region. The Turgay Plateau is a major watershed boundary, separating north-flowing polar rivers from the temperate Volga or Caspian Sea drainage to the west. To the south of the plateau, the Irghyz and Turgai rivers evaporate in the Central Asian desert. END_OF_DOCUMENT_TOKEN_TO_BE_REPLACED