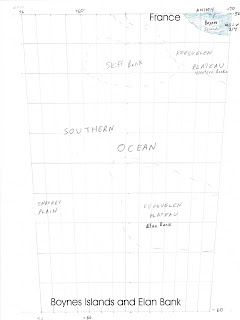 Left Behind When India Moved North

This map area includes a small group of islands, Isles de Boynes, on the western edge of the Kerguelen Plateau, the second largest volcanic plateau in the world (the largest is called Ontong Java, and is northeast of New Guinea and the Solomon Islands along the equator). Volcanic activity has extended over the area for the last 130 million years, but most of the plateau is believed to have initially formed during two bursts of volcanic activity—one in the southern area between 109 and 115 million years ago and one in the central plateau about 85 to 88 million years ago. This was during the Cretaceous Period. During that burst, at least part of the plateau formed islands. Most of the plateau is now under water and has been so for millions of years, but at one time (Cretaceous Period), it was emergent or under shallow water. During the Cretacenous, Kerguelen was part of a land bridge between Antarctica and India-Madagascar. Wood fragments, charcoal, spores, and seeds found in late Cretaceous sediments now under more than 1,000 m of water indicate that the plateau was covered with forests. END_OF_DOCUMENT_TOKEN_TO_BE_REPLACED