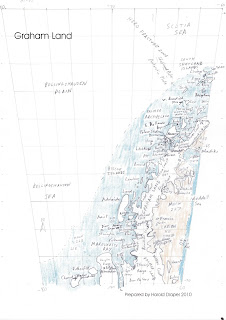 The Antarctic Peninsula sticks out into the flow of the Southern Ocean around Antarctica and causes upwellings, creating a highly productive marine ecosystem, noted for penguins and marine mammals. East of the peninsula, the Larsen Ice Shelf is breaking up on the edges. The Wordie Ice Shelf, formerly in southeastern Marguerite Bay, had melted by 2009. In the South Shetland Islands, Deception Island volcano and Livingston Island harbor Antarctic flora and fauna while providing spectacular volcanic scenery. Much of the scientific research is situated around Anvers Island, where Palmer Station is located. Vascular plants are found as far south as Lagotellerie Island, near 68 degrees South. END_OF_DOCUMENT_TOKEN_TO_BE_REPLACED