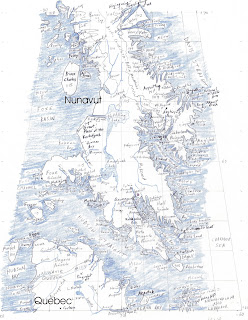 In 1576, a voyage from England under the leadership of Martin Frobisher sought to find the Northwest Passage, a straight that would lead to China. He sailed into Frobisher Bay and was ambushed by natives. However, he was able to collect rock specimens. He returned to England, carrying a black stone that assayers pronounced was high grade gold ore. Two more expeditions were funded to explore the gold, and a settlement was made on Kodlunarn (White Man’s) Island to mine the gold. Ships returned to England two times with ore, but when the second shipment of ore arrived in England, they learned that the first shipment of ore had been determined to be worthless. Today the island is preserved as a national historic site. END_OF_DOCUMENT_TOKEN_TO_BE_REPLACED