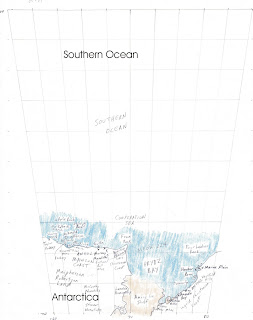 Prydz Bay and the Amery Ice Shelf are one of the most prominent bays or indentations in the solid wall of icy land and mountains that is East Antarctica. Prydz Bay is in a rift valley, which matches another rift valley in present-day eastern India, and an indication of the long journey of India since the breakup of Gondwana. The rift valley in India that is matched is either Godavari or Mahanadi. The National Centre for Antarctic and Ocean Research in India thinks it is the Mahanadi Rift. Prydz Bay formed in the Late Paleozoic Era during early Gondwana rifting and was adjacent to either the Godavari or Mahanadi rift of northeastern India. India started moving away from Antarctica in the early Cretaceous Period. Sediments under the bay contain coal, which formed when the area was covered with southern conifer rainforest from the late Cretaceous to the Late Eocene. In the Oligocene, the area went underwater and transitioned to a glacial environment in the Late Eocene. By the Middle Miocene, a polar ice sheet was established. END_OF_DOCUMENT_TOKEN_TO_BE_REPLACED