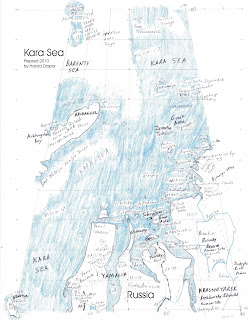 High arctic tundra surrounds the Kara Sea, and the sea itself is notable for its extensive area of shallow continental shelf. To the west of the Kara Sea is Novaya Zemyla, and the north island (Severny) is shown on the map. Cape Zhelaniya at the tip of the north island is considered to the northeast tip of Europe. To the south and east are the high arctic islands of Russia, the Yamal and Gydan peninsulas, and the Pyasina Delta and islands. The Yenisei River and Bay represents a biogeographical boundary between the western and eastern Siberian floras. Sibiryakova Island and the Gydan Peninsula are part of the western area and the mainland just to the east in the Pyasina watershed is part of the eastern flora area. END_OF_DOCUMENT_TOKEN_TO_BE_REPLACED