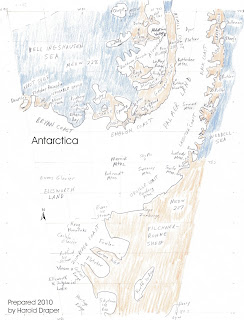 Ice shelves in the Bellingshausen Sea are melting, making map-making a moving target. The attached map shows the grounding lines on US Geological Survey maps published for the area; the geography is subject to change as the polar regions warm and coastal features are revealed. The more northerly Wilkins Ice Shelf collapsed in 2009 between Charcot Island and Latady Island and is no longer connected to Charcot Island. The Bryan Coast contains a 250-km long ice wall along the Bellingshausen Sea coast.

In southern Alexander Island, nunatuks (rocky mountaintops) stick up above the ice sheet and reveal fossil forests still standing upright. Roots can still be excavated from fossil soils. A diverse flora of fern fossils has been found that links this flora to the Gondwana floras also found in the Cretaceous in Australia, India, and South America. Gondwana broke up about 150 million years ago. West Antarctica is made up of unstable remnants (crustal blocks) of Gondwana. On this map are the Gondwana remnants of the Antarctic Peninsula, Haag Nunatuks, and Ellsworth Mountains. The Ellsworth Mountains rise to 16,000 feet in elevation at Vinson. END_OF_DOCUMENT_TOKEN_TO_BE_REPLACED