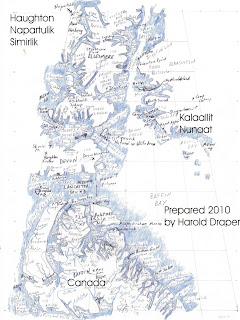 Mars on Earth, where fish came ashore and mammals went back to the sea, a mummified forest, and a gull that nests on nunatuks

If you start at Quebec City and head 2,000 miles north, you would reach the area of this map. This map area includes northern Baffin Island, eastern Devon Island, eastern Axel Heiberg Island, southern Ellesmere Island, and the Hayes Peninsula of Greenland. Ecologically, this is an area of arctic tundra. However, the Nature Conservancy and World Wildlife Fund ecoregions project has delineated the tundra into five different terrestrial ecoregions and six different marine ecoregions in this map area, based on vegetation and wildlife present. END_OF_DOCUMENT_TOKEN_TO_BE_REPLACED