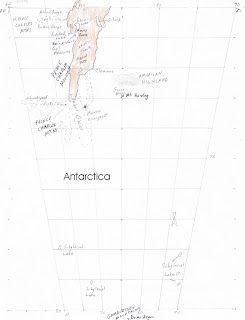 Coldest place on Earth, mountains buried in ice, and river gorges made by vanished rivers

Amery Ice Shelf and Lambert Glacier occupy a deep rift valley, one of the most prominent bays or indentations in the solid wall of icy land and mountains that is East Antarctica. Lambert is the largest valley glacier in the world. Below the ice of the Amery Ice Shelf, a marine community thrives underneath 700 m of ice and over 1200 m of sea water. Drilling during 2005 into the ice shelf by the Census of Antarctic Marine Life indicates that sponges, fan worms, urchins, and sea snails are abundant.

To the west of the Amery Ice Shelf, the Prince Charles Mountains rise. Approximately 500 million years ago, the Prince Charles Mountains were joined with the western Ghats of India as part of one mountain range. The Amery Oasis, located just west of Amery Shelf, is an ice-free area with a river gorge from a now-vanished river. Coal seams contain fossilized tree remains. END_OF_DOCUMENT_TOKEN_TO_BE_REPLACED