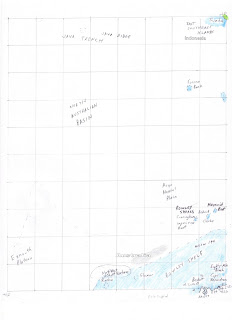 The Indian Ocean that dominates this map area marks the transition between the equatorial forests to the north and the desert to the south. Upper surface layers of the ocean are occupied by Indonesian throughflow waters, which are warm and of low salinity. These waters flow toward the poles because the lower density causes a difference in sea level height between the Pacific and Indian Oceans.

In between is the Rowley Shoals, a chain of three diverse coral reefs and islands preserved as marine protected areas. To the north of Rowley Shoals, marine canyons associated with upwellings enhance biological productivity and attract predatory fish, sharks, toothed whales, and dolphins. To the west of the Rowley Shoals is the Exmouth Plateau, a now-submerged leftover fragment from continental drift which is attached to western Australia. The plateau is 500 to 5,000 m in depth and is dotted with pinnacles. The extensive shallow continental shelf off of Western Australia shows enhanced fish diversity. Of the 500 fish species, 76 are endemic to Australia. Rowley Shelf is the location of Australia’s largest oil field, the North West Shelf Venture. A pipeline takes the oil to shore from the vicinity of Rankin Shoal. END_OF_DOCUMENT_TOKEN_TO_BE_REPLACED