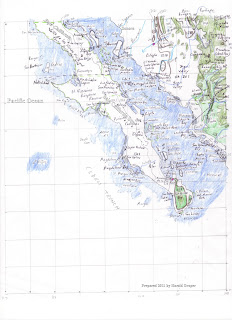 In the 1940s, the Rockefeller Foundation was working with Mexico to improve its agriculture. The country was in the middle of a devastating wheat stem rust epidemic. The foundation hired Norman Borlaug as a wheat breeder to try to improve resistance to stem rust. The work was taking place at the cooler highlands near Mexico City. When Borlaug learned that an abandoned experiment station was available in the Yaqui Valley of Sonora, he realized that two generations of wheat could be grown per year. First, the wheat could be planted in the summer in Mexico City. Then that seed could be harvested and grown in the winter in Sonora. By breeding two generations per year, the time it takes to breed new hybrid varieties would be cut in half. The Sonoran experiment station was key to developing the high-yield, disease resistant wheat varieties now in use throughout the world. Today, the Normal E. Borlaug Experiment Station in Sonora is operated by the International Maize and Wheat Improvement Center, and seeds are still being shuttled between Mexico City and the Yaqui Valley (Stokstad 2009). The Yaqui valley marks the transition between the tropical dry forests of Mexico and the Sonoran Desert, which extends north into Arizona. END_OF_DOCUMENT_TOKEN_TO_BE_REPLACED