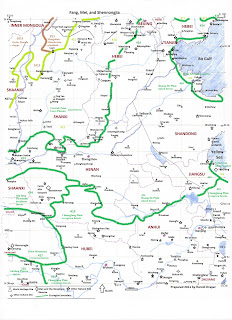 III. Overview of the Paleontological Landscape

Prior to the dinosaur extinction at the end of the Cretaceous Period 65 million years ago, there was an even larger mass extinction, at the end of the Permian Period. The best uninterrupted Permian-Triassic marine interval found in the world is at Mei Mountain, just west of Tai Lake in Zhejiang province. This extinction event eliminated 50 percent of marine families, 96 percent of marine invertebrates, and decreased terrestrial reptilian faunas. It was originally thought that the extinction event might be related to volcanism at the Siberian traps to the north of China (Clark et al. 1986; Reme et al. 1995). However, the end-Permian boundary sediments at Meishan have metallic grains condensed from an impact-generated vapor cloud. These grains are present from the South Pole to the Equator, where China was located at the time. Thus, there is evidence that the two largest extinctions, Cretaceous-Tertiary and Permian-Triassic, were caused by catastrophic impacts (Basu et al. 2003). Dating of ash beds at Mei Mountain have provided a precise date of 252.6 million years ago for the mass extinction (Mundil et al. 2004). END_OF_DOCUMENT_TOKEN_TO_BE_REPLACED