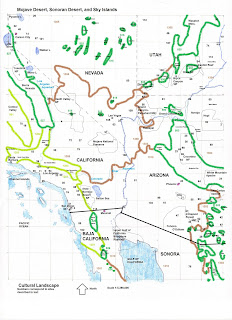 This section provides an overview of National Historic Landmarks (NHLs) and other notable historic properties in the desert southwest. Part III contains a detailed listing of all sites.

Perhaps the most controversial of the sites is the Calico Early Man Site in the Mojave Desert near Barstow, California. It was made famous by Louis S.B.Leakey, the Kenyan anthropologist who discovered much evidence of early man in Africa. From 1964 until 1972, Leakey promoted the idea that the artifacts found in the American desert were similar to artifacts found in Africa. Leakey excavated an alluvial fan and considered the artifacts found to be the result of human activity. The age of the fan was believed to be over 50,000 years old (Leakey, Simpson, and Clements 1968). Today most professionally trained archaeologists question whether the alleged stone tools were manufactured by humans. However, Friends of Calico Early Man Site continues the tradition of investigating the site for evidence of early man (site 75 on map). END_OF_DOCUMENT_TOKEN_TO_BE_REPLACED

Part I of the Cultural Landscape

The prehistoric inhabitants of the Sonoran and Mojave Deserts left behind abundant archaeological evidence of their presence. Canals, trincheras sites, and rock art are three of the more notable cultural landscapes in the region.

At the Pueblo Grande Museum and Archaeological Park in Phoenix, the largest canals known from pre-Columbian North America are preserved. Modern irrigated agriculture and suburban development has largely obliterated these canal systems. However, approximately 500 km of major canals and 1600 km of smaller canals have been recorded in the Salt River Valley. These canals were largely built between 900 and 1450 CE. The extensive canal system would easily have diverted all of the available Salt River water during dry periods, suggesting that some sort of coordination or control was necessary to allocate the water among all the systems in the Salt River Valley. END_OF_DOCUMENT_TOKEN_TO_BE_REPLACED