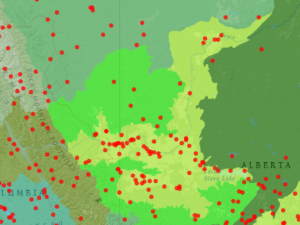 This ecoregion is found in Alberta and British Columbia. The Peace River parklands were lumped into the Mid-Canadian Boreal Forests ecoregion in the 2017 delineation. These sites were formerly part of the Canadian Aspen Forests and Parklands ecoregion and the separation is maintained here because of their distinctive grassland characteristics and local distinction as the Peace River Parklands.

Dunvegan National Historic Site, Alberta (N55˚55’ W118˚36’) is operated by the province of Alberta as Historic Dunvegan Provincial Park and Historic Site. The North West Company fur trading post of 1805 was taken over by the Hudson’s Bay Company and operated until 1918. It was also an early mission site and a starting point for travel to British Columbia. The 9-ha site includes a historic church and living history interpreters, with riverside walking trails. The location is 26 km south of Fairview on Route 2 at the Peace River.

Fort Fork National Historic Site (N56⁰8’ W117⁰28’) is on the Peace River 10 km upstream from the mouth of the Smoky River. This North West Company Trading Post was established in 1792 and abandoned in 1805. It was the starting point for the Alexander Mackenzie expedition to the Pacific in 1793. The Peace River Wildland Provincial Park is adjacent. There are no facilities.

Fort Vermilion National Historic Site (N58⁰24’ W116⁰0’) was established on the Peace River in 1828.The 1908 Old Bay House is the only Hudson’s Bay Company factor’s house on the original location in Alberta. The Old Bay House is 2½ stories at the junction of River Road and 45th Street in Fort Vermilion.

Provincial and Local Sites in the Peace River Parklands

Beatton River Provincial Park (N56⁰6’ W120⁰23’) is 186 ha at the confluence of the Beatton and Peace Rivers. Amid the old growth cottonwood forest is the site of 1806 Fort D’Epinette, built by the Northwest Company. The park is managed as a day use park.

Frank Lake (N55⁰54’ W116⁰54’) is a small isolated lake 20 km southeast of Nampa. It is not accessible by road. The lake was designated an Important Bird Area because it hosts tundra swans in continentally significant numbers. Also, Canada geese, surf and white-winged scoters, bufflehead, and red-necked grebe are found on the lake.

Kleskun Hill Natural Area (N55⁰16’ W118⁰31’) is a 65-ha tract operated by the County of Grande Prairie No. 1 for camping. The area features hills rising 100 m above the surrounding prairie, with grassland plants, prickly pear cactus, and badlands of clay, sandstone, and coal exposed. The site is the northernmost badland in Alberta. Adjacent is the Kleskun Hill Historical Village, restored to the early 20th century, operated by the Bezanson community.  The sites are on Township Road 724 off of Range Road 41 north of Route 43.

Isoegun Lake Provincial Recreation Area (N54ᵒ27’ W116ᵒ49’) is 116 ha 11 km north of Fox Creek. It is operated by the Town of Fox Creek for camping and lakeside recreation.

Kiskatinaw River Provincial Park, British Columbia (N56⁰5’ W120⁰9’) is 154 ha at the confluence with the Peace River. Mule deer may be seen in the grasslands above the Peace River.

Moonshine Lake Provincial Park (N55⁰53’ W119⁰13’) is 1,103 ha of boreal mixed wood and wetland complexes on Route 725, north of Route 49 between Rycroft and Dawson Creek. An extensive trail network has been constructed north and west of Moonshine Lake. Jack Bird Pond within the park is noted for waterfowl viewing.

Notikewin Provincial Park (N57⁰14’ W117⁰8’) is 9,697 ha on the Peace River at the confluence with the Notikewin River. Access is via Route 35 at Hawk Hills. The park provides wildlife viewing opportunities.

Otauwau Natural Area (N55⁰11’W114⁰21’) is on Route 2 east of Slave Lake. There are black spruce fens and white spruce uplands. The 256-ha tract is noted as being used for botany research.

East Pine Provincial Park, British Columbia (N55⁰43’ W121⁰14’) is 14 ha, 30 km east of Chetwynd on Route 97. The day use area is at the Pine and Murray Rivers confluence. Balsam poplar and white spruce forest is present.

Police Point Natural Area (N55⁰34’ W116⁰8’) is 370 ha on Route 750 near the western end of Lesser Slave Lake. The property fronts the Buffalo Bay, part of the South Heart River. Wetlands with black spruce fens, along with uplands with white spruce and aspen, are present.

Rolla Canyon Ecological Reserve, British Columbia (N55⁰53’ W120⁰0’) is 43 ha on the bank of the Pouce Coupe River, accessible by foot only. The reserve is a paleontological site, known for ammonite fossils.

Saskatoon Mountain Natural Area (N55⁰13’ W119⁰17’) is 723 ha 30 km west of Grande Prairie and north of Route 43. The mountain rises 150 m above surrounding lands and is noted for aspen, balsam poplar, white spruce, and birch forests with views of the Rocky Mountains.

Lesser Slave Lake Provincial Park is 7,617 ha on the east shore of Lesser Slave Lake. Within the park, Marten Mountain soars 450 m above the lake. The park is noted for natural white sand beaches, a sand dune complex and beach ridge that is 1,500 years old, and balsam fir and lodgepole pine forests. The park is an Important Bird area for migrating tundra swans, and nesting waterfowl. Common goldeneye, mallard, common merganser, bufflehead, and three species of terns are known to nest, as well as 20 species of warblers. The Boreal Center for Bird Conservation and the Lesser Slave Lake Bird Observatory maintain facilities in the park. In addition, the Trans-Canada Trail traverses the park for 25 km along the shoreline of Lesser Slave Lake. The south end of the park is Devonshire Beach (N55⁰19’ W114⁰46’) and the north end of the park is at the Marten River (N55⁰30’ W114⁰55’).

Taylor Landing Provincial Park, British Columbia (N56⁰8’ W120⁰40’) is 2 ha on the Peace River on Route 97 south of Fort St. John. The day use area is forested with balsam poplar and trembling aspen.

Winagami Lake Provincial Park (N55⁰37’ W116⁰44’) is a lakeside recreation area and birdwatching area on Township Road 770, with nesting grebes, sandpipers, gulls, and ducks. A trail is on the west shore of the lake.