Giant clams and an underground river 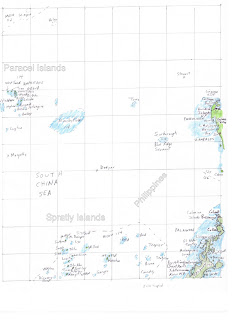 In the Lingayan Gulf off of the Philippine province of Pangasinan, fish and shrimp pens fill shallow tidal areas that once housed mangroves. Because mangroves can process fertilizers and nutrients, an integrated aquaculture could be developed that allows both mangroves and shrimp pens to coexist. Mangroves, seagrass beds, and coral reefs bordering the 7150 Philippine islands contribute to the livelihood and well-being of coastal communities by supporting fish, shellfish, shrimp while providing coastal protecting, erosion control, and nutrient recycling. The Philippines has ‘greenbelt’ laws that require a mangrove strip of 50 to 100 m facing the open sea (Primavera 2005). On the west side of the same gulf is the Hundred Islands National Park, a scenic area with hundreds of small islands shaped like mushrooms. The area is noted for its giant clams, which are the subject of research at Bolinao Marine Laboratory. The gulf was the site of World War II battles.

On the west coast of Luzon Island, the coastline of the Zambales Province provides offshore islands noted for snorkeling. In the southeast corner of the map is Palawan Province which has unique rainforest flora and fauna. The Puerto Princesa Subterranean River National Park was established as a result of a debt-for-nature swap and protects a rugged karst landscape. Endemic animals include a bearcat, mousedeer, parrots, hornbills, and pheasants. Palawan is also known for pristine beaches, reef diving in Honda Bay, and waterfall touring. To the north of the island, but still part of the province of Palawan, are the Calamian Islands, which are important areas for rare birds. The entire Philippine province of Palawan is managed as an international biosphere reserve.

Tropical and Subtropical Moist Broadleaf Forests of the Indo-Malayan Biome

IM 123, Luzon rain forests. These lowland evergreen dipterocarp rain forests grade to mangroves and Barrintonia trees near the coast. The forests are dry from November to April and wet from May to October. Flying fox bats are the largest bats in the world. There are 34 near-endemic birds and unique mammals such as the Philippine warty pig, Philippine brown deer, Malay civet, and common palm civet.

IM 143, Palawan rain forests. These lowland evergreen dipterocarp rain forests have a short one- to three-month dry season from November to May. Some forest areas are deciduous during this period. The St. Paul Mountains and El Nido areas are spectacular karst landscapes with cliffs and caves. The area is noted for endemic mammals including a bearded pig, tree squirrel and a rat. The Calamian deer is found only on the islands of Busuanga, Culion and Calauit. There are 20 restricted-range birds and 2,000 species of plants. Found in Palawan and the Calamian Islands.

IM 148, South China Sea Islands. The islands that are high enough support a tropical evergreen forest, although most have more limited vegetation. There is roughly a six-month wet and six-month dry season. The 600 coral reef islands of the Spratleys barely barely surface and are mostly devoid of vegetation but could support forest vegetation. Found in the Paracel and Spratley Islands.

V. Freshwater Ecoregions of the World

VI. Marine Ecoregions of the World

112. Gulf of Tonkin. Found on continental shelf in northwest area of map.

126. Palawan/North Borneo. Found along the coast of Palawan and Calamian Islands.

127. Found along the coast of Luzon and Cabra Island.

IX. Other points of interest

Hundred Islands National Park, Pangasinan, Philippines. Managed by the City of Alaminos, this area is composed of 123 mushroom-shaped islands in Lingayan Gulf. It is one of the national geologic monuments of the Philippines with giant clams visible offshore. Noted for snorkeling, scuba diving, kayaking and birdwatching. Terrestrial ecoregion IM 123 and marine ecoregion 127.