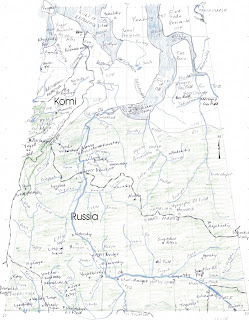 This map area marks the transition from boreal forest to tundra and contains the northern extension of the Ural Mountains, which is the Yamal Peninsula. East of the Urals is the low-lying West Siberian Plain. It is the site of the world’s second largest gas field, the Urengoy field, in Yamalia; and the home of most of percent of Russia’s oil production, in Khantia-Mantsia. The Samotlor Oil Field is Russia’s largest. The Urengoy and Nadym gas fields extend southward from the Gulf of Ob and Gulf of Taz. To the north of the Taz River, the Yamburg Gas field is under development as the world’s third largest gas field. The oil fields are north and east of Surgut and around Nizhnevartovsk. One of Russia’s first oil fields is located in the southwest of the map area around the Konda River (Shaimskoye Oil Field). To complete the fossil energy picture, the northeastern Komi Republic is a major coal mining area, especially around the city of Vorkuta.

The Ob River estuary is the longest in the world. The vast floodplain of the Ob River from Khanti-Mantsia north to the Gulf of Ob is one of the richest waterfowl habitats and nesting areas in the world. Three large Ramsar sites, wetlands of international importance, have been designated along the Ob River.

The Siberian subsoil contains the remains of as many as 150 million mammoths which have been frozen for thousands of years. Ivory tusks are found as more and more tundra melts away as the world warms. Common areas for exposure are along the eroding banks of rivers (Kramer 2008). Since the 19th century, about a dozen soft tissue specimens of mammoths have been recovered. In May 2007, a complete month-old baby mammoth was found lying on a sandbar in the Yuribey River in Yamalia (Mueller 2009).

Ecoregions and Provinces/Political Subdivisions of the Palearctic (PA) Biome

407. Barents Sea Drainages. Includes area of map from Kara River west and includes rivers in Nenetsia, Komi Republic (Usa River) and Vaygach Island. Rivers flow through extensive swamps, meadows and low rolling plains. The Kara flows through the Pay Khoy Mountains, which are separated from the Urals by a vast swampy plain.

602, Ob. Fifth largest drainage basin in the world, includes southern and eastern parts of map area. In the map area the river flows through a swampy taiga floodplain about 20 to 30 km wide. This is within the extensive Western Siberian Lowland, which is 1500 km wide from east to west and 2500 km from north to south. Fish species include arctic migratory species such as tugan, peled, muksun, and char and boreal river species of pike, dace, and perch. Shallow floodplain water bodies called sors serve as major areas of feeding for migratory fish. Major tributaries shown on map are Irtysh, Sosva, Nadym, Pur, and Taz.

605. Yenisei. The tributary shown on the map is the Tanama in the northeastern area. This river system is the largest in volume in Russia.

Upper Dvuobje. Found in Khantia-Mansia. This network of Ob River and its tributaries contains seasonal lakes, marshes, and islands in a taiga forest. A rich waterfowl nesting habitat and important bird area. Ecoregion 611.

Kara Impact Structure, Nenetsia. Located where the Kara River enters the Gulf of Baydarata, dated to 70.3 million years ago. Ecoregion 1108.

Yuribey River, Yamalia. Important bird area for geese and swans. In 2007, a mammoth over 40,000 years old was found along a sandbar in the Yuribey River. The skeleton, teeth, and soft tissues were undamaged. Found in Yamalia. Ecoregion 1114.