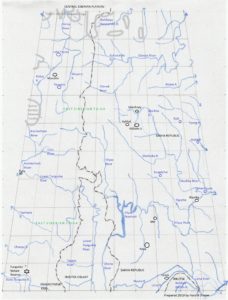 This map area is almost completely in the East Siberian Taiga ecoregion, with small areas in the northwest grading into the Taimyr-Central Siberian tundra. The taiga is characterized by larch forests but without large bogs or swamps. On maps this taiga ecoregion occupies the Central Siberian Plateau because of its hillier terrain. It is the most extensive natural forest in the world, but, as seen below, portions have been impacted by natural and man-made activities in the last 100 or so years.

On June 30, 1908, an explosion over today’s Tunguska Nature Reserve left thousands of trees charred over a 2000-km2 area. The most common explanation for the explosion has been that it was an asteroid or meteorite entry into the atmosphere. However, there is no crater or meteorite debris. One possibility is a natural gas explosion from the abundant resources in the area (Anonymous, 2002) If it was a meteorite, it is possible that heat from an exploding meteorite burned up all the meteorite fragments (2). The explosion coordinates (N60⁰55’ E101⁰57’*), are north of Vanavara and the Stony Tunguska River.

A meteorite would have been about 6 km high and 50-60 m in diameter when it exploded. Underneath the blast, the trees were incinerated but left standing. At 5 to 15 km, trees were blown over with the tops pointing away from the blast. Witnesses in the towns of Kirensk (400 km away) and Vanavara (40 km south) saw a fireball. A hot wind was reported blowing from the north. Russian researchers later found tiny stony particles embedded in trees (Anonymous, 1996; Hartmann, 2018).

A meteorite fall of this size would have injected up to 30 million tons of nitric oxide (NO) into the stratosphere and mesosphere. This would have affected the ozone layer. Turco et al. (1981) found evidence from the Smithsonian Astrophysical Observatory Records that ozone was recovering between 1909 and 1911 from a low in 1908. Ganapathy (1983) found evidence that metallic spheres in the Tunguska area were enriched in iridium, an extraterrestrial signature of impacts.

Lake Cheko (N60o58’ E101o52’) has been investigated as a possible impact crater and found to be potentially caused by an impact (University of Bologna, 2018), but recent studies of the sediment age in the lake suggest it is older than 1908, according to Sputnik News (2017). Also, other fragments should be nearby, and rocks in the area would show trauma if there had been an impact (MacMillan 2008).

The site of the Tunguska Explosion is protected as the Tunguska Nature Reserve (Zapovednik), a 296,000-ha area surrounding the affected site (N60o44’ E101o58’).

The Central Siberian Plateau landform is made up of volcanic material known as flood basalt. When large-scale volcanic eruptions took place to create these basalts, they created what are known as large igneous provinces (LIPs) or traps. The Central Siberian Plateau is made up of two LIPs, one in the Sakha Republic area and one in the Krasnoyarsk Krai area. The Yukutsk-Vilyuy LIP was formed at the end of the Devonian Period (359 million years ago) (Ivanov et al., 2015). This date is associated with an end-Devonian mass extinction of sea life, where up to 87 % of species went extinct. However, the Devonian is also the time when land plants evolved vascular features and seeds. During this time, the first forests spread across the land. It is possible that this vegetation of the earth could also have led to the mass extinctions in the sea because as the plants colonized new habitats, more nutrients could have been released from the soil and the water could have been muddied. Vast algal blooms would live off the additional nutrients and cause anoxia in the oceans and cooling worldwide as levels of carbon dioxide were reduced. The end-Devonian mass extinction was a re-setting of life on Earth, allowing new animal types to evolve in the following periods, the Carboniferous and Permian. The Yukutsk-Vilyuy LIP is associated with a chain of kimberlite fields (diamond mines) that stretches nearly 1,000 km in a southwest to northeast direction across this part of Siberia (Kravchinsky et al., 2002).

The second LIP is associated with the end of the Permian Period, approximately 250 million years ago (Campbell et al., 1992). This is called the Siberian traps and is the largest known LIP. The date of the Siberian traps coincides with the Earth’s most catastrophic mass extinction at the end of the Permian period (Reichow et al., 2004). At this time, volcanism released large masses of sulfate aerosols, chlorine, fluorine, and carbon dioxide in a short period, as little as 60,000 years, triggering warming. The chlorine and fluorine would have damaged the ozone layer. It is believed that curtailment of photosynthesis from global dimming led to rapid carbon dioxide buildup, warming, and shallow water anoxia (Saunders and Reichow, 2009). The extra carbon dioxide from the Siberian traps dissolved in the oceans, harming creatures that create calcium carbonate shells. On land, there was a collapse of land plants. The collapse was so severe that there are virtually no coal deposits known from the early Triassic period. The end-Permian extinction could have been a cascading series of events that affected the entire biosphere (Sutherland, 2016). Initially, the volcanic eruptions released enough carbon dioxide to cause a 10o to 15oC tropical warming. This resulted in unbearably hot temperatures on land; organisms were also likely affected by ultraviolet radiation from a collapsed ozone shield. The marine extinction was most severe at high latitudes and its severe effects were likely due to hypoxia, or deoxygenation of the oceans. Organisms at tropical latitudes were preadapted to tolerate low oxygen and high temperatures, and thus were better able to survive the global warming (Kump, 2018; Penn et al., 2018).

Between 1974 and 1987, 11 underground nuclear tests were conducted in the Vilyuy region. Two of the 11 had above-ground fallout (Crate, 1996). At least 7 explosions were conducted in the Neva area (N61o30’ E113o0’) southwest of Mirnyy between 1976 and 1987. These explosions were aimed at stimulating oil production from the bedrock of the area and were considered successful (Nordyke, 2000). The Krystall explosion near Udachnyy (N66o25’ E112o22’) in 1974 was aimed at creating a dam for the tailings pond at the diamond mine near the Daldyn River. Radiation leaked from this explosion and today levels of radiation are 5 times natural background levels (Yakovleva, Alabaster,and Petrova, 2000). The Kratom-3 explosion (N65o56’ E112o20’), which took place on August 24, 1978, was adjacent to the Markha River east of Aykhal (Artamonova, Kozhevnikov, and Antonov, 2018). It was part of a deep seismic testing program to study the crustal structure of the earth. The explosion resulted in a radioactive release during a drizzling rain. The radionuclides contaminated the soil and the larch forest exposed to the cloud was killed. Rehabilitation operations were conducted three years after the explosion and in 2007. The site remains contaminated with strontium-90, cesium-137, and plutonium 238-240, which are present in plants, forest cover, and soil. About 200 m away from ground zero, the plutonium concentration is higher than at Chernobyl (Goryachenkova et al., 2017; Ramzaev, 2009). A long-term effect of this activity has been permafrost degradation, perhaps through flow of heat through the rocks over time (Artamonova, Kozhevnikov, and Antonov, 2013).

Murukta Depression (N67o43’ E102o20’) is a 315,105-ha Important Bird Area in Evenkiysky District of Krasnoyarsk. The area contains numerous small lakes and marshes adjacent to the Kotuy River. Nearby Lake Yessey (N68o25’ E102o25’) is known for an endangered species (IUCN Red List) of char which is endemic to four lakes in the Taymyr area (Devi and Boguskaya, 2009).

Although transportation is limited in summer months, winter ice roads connect Lensk, Mirny, and Udachny in the Sakha Republic and Tura in Krasnoyarsk Krai.

* All coordinates are approximate.